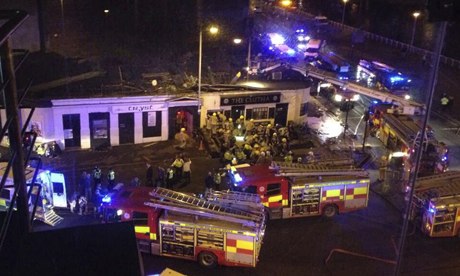 This weekend people living in Glasgow are reeling with the effects of the nightmare of the Glasgow Police helicopter crash. Only 48 hours ago, families, friends and work colleagues were unaware whilst making plans for Christmas, not expecting anything to come along and change their lives from the norm.

At 10.00pm on Friday night, revellers were enjoying a night out together, for many payday had a last arrived and with a few spare pounds in their pockets, around 120 people gathered in The Clutha Bar to listen to live music, unaware of the disaster that was about to unfold. At around 10.30pm the Glasgow Police helicopter, which was flying routinely overhead, was reported by eye witnesses at the scene to he heard having engine problems. On lookers at the scene said that they heard the engine making “spluttering” sounds and seconds later, it plunged to the ground, crashing through the roof of The Clutha Bar. Over the coming minutes, hours and subsequent days, reports have been released initially of 32 people being taken to hospital with unknown injuries, but a later press release revealed that 8 people had died in the accident and 11 had suffered critical injuries, with the scene yet to be fully cleared to check for more fatalities.

Where do you start to cope with the loss after such a disaster?

Dealing with grief, at the time as horrific shock, adds another dimension to the loss. Having to face the loss of a family member or friend is hard enough, but having to also accept that they have been part of a major disaster, that is being heavily focussed upon by the world’s media is very difficult. Turning on the television, listening to the radio or simply getting news updates sent to you on a smart phone, tablet or PC, constantly drives home the constant pain. Due to the fact that the Glasgow Police helicopter crashed through the roof of a pub at night, the worlds media will focus in even more, desperately looking for answers to the questions, why, how and what caused the accident to happen, but this media frenzy just makes thing so much more intense for family and friends coping with losing someone close.

Over the coming days and months, it is extremely important that the loved ones of those involved receive love and support to cope. It is not only those who are coping with the death of someone close, but due to the nature of the disaster, it in inevitable that will be those with life changing injuries, who also require emotional support for themselves, their partners, families and friends, who will also need help, support and time to be allowed to grieve.

Connecting with specialists in dealing with life changes, loss and adaption to live can be found by visiting our directory of support organisations. In addition, for many it brings to the fore the need to plan for the unexpected events that life can bring. Making plans with things like life insurance, that includes critical illness and injury cover is a must, as is making sure that we all have a will in place to protect our loved ones, making sure that they are cared for in a way that we would want if we were no longer around, otherwise others will make choices, as would be the case if we die without making a will.

To find out more about support for the loss of a loved one, visit our website’s Directory Of Organisations who Provide Counselling and Support for coping with loss.